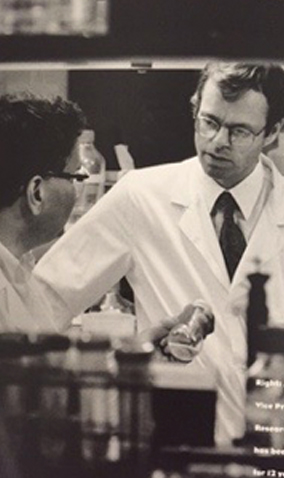 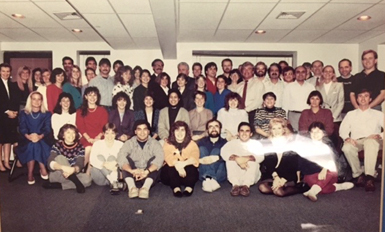 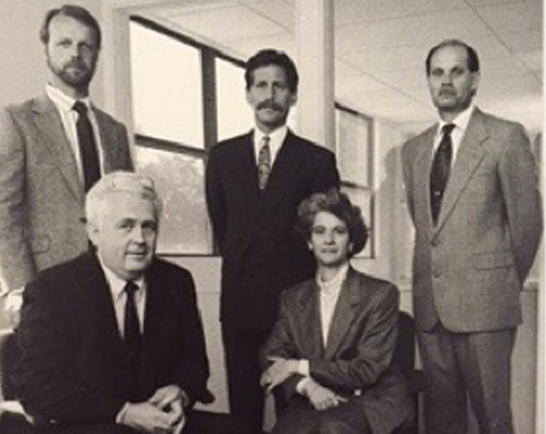 How Our Journey Began

Baruj Benacerraf, head of the Sidney Farber Cancer Institute (now the Dana Farber Cancer Institute), was approached by a small group of investors with a vision: to create more effective, better tolerated anti-cancer therapies. Specifically, they wanted to find a way to leverage the targeting ability of antibodies to deliver toxic drug directly to cancer cells. Benacerraf went on to suggest that the investors start with a grant from which the Institute would work with dedicated scientists.

The rest, they say, is our history…

ImmunoGen is founded with $3 million in seed financing.

The Company’s first Scientific Advisory Board is formed and they hire ImmunoGen’s first scientist.

ImmunoGen’s labs are up and running. Work on the first generation of antibody-drug conjugates (ADCs) begins and the search for potent payloads is on.

The Scientific Advisory Board, key investors, and ImmunoGen scientists meet every six weeks to discuss making antibodies and the scientific challenges of conjugation.

Mitch Sayare, ImmunoGen’s first CEO, is hired. His office is in Harvard Square and he spends the next year developing the Company’s business plan.

In June, ImmunoGen scientists being their first experiments with maytansine – work which ultimately develops the Company’s maytansinoid ADC technology.

By October, ImmunoGen has 15 employees and opens its new lab and office space in Cambridge, Massachusetts.

ImmunoGen is making its own antibody and has enough blocked ricin to move into clinical trials.

The Company files its first Investigational New Drug (IND) application for oncolycin B, an anti-CD19 monoclonal antibody which is anti-B4 conjugated to toxin-blocked ricin and targets non-Hodgkins lymphoma. ImmunoGen’s first clinical trial is underway soon after. With a desire to explore apoptosis, ImmunoGen partners with the Dana Farber Cancer Institute to create a subsidiary called Apoptosis, Inc. (ATI). After swelling to 185 employees over the years, ImmunoGen reorganizes. 85 employees remain to carry forward the most important science.

Interim clinical data on the use of oncolycin B arrives. ImmunoGen abandons the blocked ricin platform, terminating its Phase III clinical trial due to insufficient activity.

ImmunoGen partners with BioChem Pharma, providing $11 million in funding for ATI research for the next three years. A major R&D collaboration with Aventis (now Sanofi), is announced. The deal is designed to support ImmunoGen’s research and feed Sanofi’s pipeline for years to follow. ImmunoGen relocates its lab and office space to Waltham, Massachusetts.

In the fall, research phase of Sanofi collaboration ends and the ImmunoGen team redirects its energy on building the Company’s proprietary pipeline of ADC compounds.

ImmunoGen strikes a major deal with Novartis, receiving a $45 million upfront payment in exchange for exclusive rights to use its technology to make antibodies.

In February, T-DM1 technology licensed to Genentech in 2000 is approved by the FDA for the treatment of people with HER2-positive metastatic breast cancer who have received prior treatment with Herceptin® (trastuzumab) and a taxane chemotherapy. Marketed in the US by Genentech under the brand name Kadcyla™, it is the first ADC ever approved for solid tumor indication and demonstrates the promise of ImmunoGen’s technology. Kadcyla™ receives further approval globally as time passes.

Phase 1 clinical data are presented in support of IMGN853, ImmunoGen’s folate receptor alpha-targeting ADC – a potential new therapy for ovarian and other types of cancer. This compound soon becomes known as mirvetuximab soravtansine.

The second to be taken under a 2010 agreement between the companies, Novartis licenses exclusive rights to use ImmunoGen’s ADC technology to develop anti-cancer therapies on an undisclosed target.

ImmunoGen is named, for the first time ever, one of The Boston Globe’s Top Places to Work. ImmunoGen is again named one of The Boston Globe’s Top Places to Work.

Takeda licenses exclusive rights to use ImmunoGen’s ADC technology in developing and commercializing targeted anti-cancer therapeutics in up to two undisclosed targets.

ImmunoGen named one of The Boston Globe’s Top Places to Work for the third consecutive year. The first patient is dosed in the FORWARD I Phase 3 study of mirvetuximab soravtansine in January.

ImmunoGen divests IMGN529, a clinical-stage anti-CD37 ADC for the treatment of patients with B-cell malignancies such as non-Hodgkin lymphomas, to DebioPharm International SA.

ImmunoGen amends its existing licensing agreements with Sanofi. ImmunoGen and Jazz announce a strategic collaboration option agreement to develop and commercialize IMGN779, IMGN632, and an additional program to be designated.

In September, the IND application for IMGN632 – an investigational therapy for patients with CD123-positive hematological malignancies, including acute myeloid leukemia (AML) and blastic plasmacytoid dendritic cell neoplasm (BPDCN) – is filed. It becomes active in October.

The first patient is dosed in the Phase 1 clinical trial for IMGN632 in patients with CD123-positive hematological malignancies.

In May, ImmunoGen announces positive findings from the FORWARD II study of mirvetuximab soravtansine combination regimens with Avastin ® and carboplatin in patients with ovarian cancer.

In June, ImmunoGen closes an upsized public offering of common stock. With gross proceeds of more than $173 million, the company plans to use the net proceeds – along with its existing capital – to fund its operations.

ImmunoGen sells its residual rights to receive royalty payments on the commercial sales of Kadcyla® for $65 million.

In March, ImmunoGen announces the Phase 3 FORWARD I study of mirvetuximab soravtansine did not meet its primary endpoint. However, based on the consistent efficacy signal in the pre-specified high folate receptor alpha subset of patients as well as favorable tolerability in both mirvetuximab patient groups, the Company moves forward to conduct additional analyses to further evaluate the potential benefit of mirvetuximab in this population.

In June, the Company announces the results of an in-depth operational review taken following the FORWARD I readout designed to extend the Company’s cash runway and deliver on its commitment to develop next-generation ADCs to bring more good days to patients and generate increased value for shareholders. The Company prioritizes the continued development of mirvetuximab soravtansine and a select portfolio of three earlier-stage product candidates: IMGN632, IMGC936, and IMGN151.

The Company presents full data and additional exploratory analyses from the Phase 3 FORWARD I study evaluating mirvetuximab soravtansine compared to chemotherapy in women with folate receptor alpha-positive, platinum-resistant ovarian cancer at ESMO in September. Based on the results of the exploratory analyses and after working closely with FDA on the design, ImmunoGen announces the Phase 3 registration trial for mirvetuximab called MIRASOL, which would begin enrolling patients before the end of the year.

In December, ImmunoGen announces an accelerated approval pathway via SORAYA, a pivotal trial evaluating mirvetuximab monotherapy in women with folate receptor alpha-high platinum-resistant ovarian cancer who have been previously treated with Avastin®.